Understand and Activate 7 chakras in Human Body – by Pallav Kumar

Chakras are mysterious wheels of energy field on our body. It is the conjunction point of three nadis mainly known as IDA nadi, SUSMNA nadi and PINGLA nadi.

There are mainly 7 chakras we generally discuss about and they are most prominently associated with our nature, behavior, attitude, thought pattern, taste, food habit etc. These seven chakras are known as — 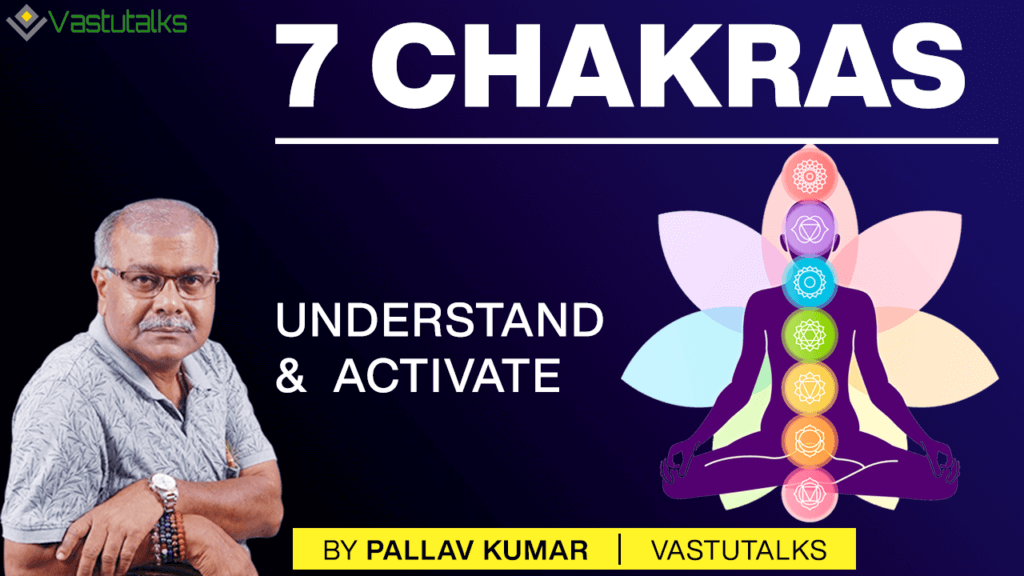 Root chakra ( Muladhar chakra)—situated at base of the spine. It represents Earth element. It’s color is red.

Third eye chakra ( Ajna chakra) situated half a centimeter above the midpoint between two eyebrows. It represents space elements. It’s color is indigo.

Crown chakra ( Sahashrara chakra) situated just above the crown of the skull. It represents space element. It’s color is violet.

This is the primary energy hub from which the energy escalates and feed the other chakras. A proper  functioning and spinning of this base chakra is mandatory to ensure the normal working of the body system. A disorder present in this chakra causes chronic fatigue and adrenal exhaustion, etc.  It connects us to the mother Earth. It keeps the mind calm and bestows inner strength and confidence. This chakra is benefited from drumming music, dance, urge to jump, run, sing.

This chakra is our power hub and empowers the ethics of our life. This is the point where our internal energies are accumulated for later life. It is the courage and confidence booster and a source of our sense morality, manifesting, creativity, sensuality and wealth. It correspondence to our inner fire that encourages us to live, experience, share and support the life. If we are doing well in the life and society, this chakra is active , strong, and powerful. An imbalance in this chakra produces problem like progeny issue, feminine identity problem, sexual dysfunction, urinary tract problem, back pain and aggression issues, etc. A well balanced sacral chakra influences our overall energy field, our state of mind and the health of our entire system.

This is one of the most active yet erratic energy centers that easily extend itself out to outer world. It generates emotions based on anger, ego, jealousy and anxiety. Basically it represents one’s individuality. Movements, social connections and intelligence are few medium through which the chakra expresses itself. If this chakra is imbalanced, then it will produce problems like egocentric behaviour, aggression, rage, toxin prone liver, frustration, nausea, and bad digestion. This chakra mainly governs liver, spleen, stomach and gallbladder.

Balanced signs and symptoms—will power, ego, trust, higher standards for own self.

This is the chakra of love, compassion, emotions, feelings, ability to read and sense the nature of others around. Healthy heart chakra makes one transparent; accept the things as they are, socializing, open to life and surroundings. An imbalanced heart chakra indicates unsocialise attitude, hat redness, difficulty in accepting people/ surroundings as it is.

Balanced signs and symptoms—Love, compassionated, open, acceptance, putting down self on other’s place.

It is associated with speech, vocal expression, strength on tone / speech and vocabulary. Weak voice, extremely loud voice, hesitant in speaking, hoarse sound on voice is some of symptoms of poor and stressed out throat chakra. A balanced throat chakra provides rhythmic tone, calm tone but with deeper meaning, attractive voice that attracts masses and mesmerizes the audience.

Known as sixth sense and connected to presence of mind, intelligence, intuition, ideas. This chakra is the medium to wake up sixth sense and spiritual development. If this chakra is Imbalanced, it will create eye sight issue, migraine, sinus, lack of inspiration. Both overthinking and under thinking can put this chakra out of balance and the person ends up feeling lost, depressed, and dull most of the time.

Balanced signs and symptoms—Judge others correctly. Intuitive, able to go beyond mind intelligence.

This chakra is the final abode of spirituality and higher self. This one is the top most of the main chakra present in the body. It connects the human with all present in this world and that world which is beyond the range of these bodily eyes. Activation of this chakra blesses one with divine intuition power. A balanced crown chakra makes one feel highly energetic, connected to the world and confined. Imbalanced crown chakra makes one feel like alone in the crowd, dull, judgmental and rigid.